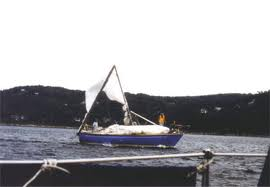 Approximately 80 days ago, a Swedish man was sailing on his boat in the Indian Ocean without an engine or a sail. A storm had broken his mast and the man was left alone on his boat, without being able to set sail for the coast.

Stig Lundvall was rescued this past Tuesday by the crew of the Greek-flagged ship Proteus. After facing extreme weather conditions, he was left drifting in the ocean for 11 weeks.

Lundvall had only one flare rocket left and did not hesitate to burn it when he saw the Greek boat. Despite being almost 1,852 metres away, Greeks saw the rocket and headed for the man’s boat. The light of the rocket lasted enough for them to position him, as it had went out as they came closer.

“We have had brief contact with him and he is happy he survived this Odyssey,” said his friend, Per-Lennart Berg, to a Swedish newspaper.

Lundvall was rescued just over 400 kilometres off Richard’s Bay, a coastal town in the east of South Africa.