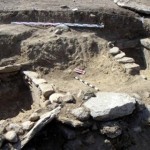 Part of the ancient Greek court Palladion, which tried murder cases from Classical until the Roman Ages, was discovered along with movable findings in downtown Athens.
In the 60’s, archaeologist Ioannis Travlos discovered another part of the court, including the entrance. But now, excavations provide interesting clues about the court’s function. The lodge found in the southern part of the court is believed to be the hearing process room.
Palladion Court, according to ancient Greek myth, was dedicated to Goddess Athena in memory of her friend Pallada. The Greek Goddess injured her friend accidentally while they were together, resulting in death.
As for the moving items, ceramic ballot boxes and coins puzzle the image of the ancient court. Judges may have had to vote for the innocent or guilty by choosing one of the two ballot boxes to throw their inscribed vote in.
Only cases of manslaughter were tried in the court. Murders characterized as “fair,” such as those caused due to wars or adultery, were tried in the Delphinion Court.