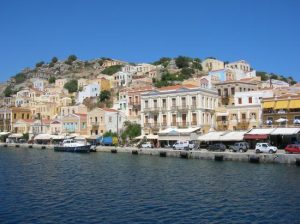 They like the sun. They love the beaches. And now they have the opportunity to buy a house on the Greek island of their choice.
More and more foreigners are interested in investing in real estate, especially on the Greek islands, due to low prices as a result of the economic crisis. According to the facts, the prices for holiday homes was reduced to 40%, and in some cases even more during the last two years, so now a new market has been created for anyone who can afford it.
The biggest interest is shown, according to real estate offices, from Germans, Austrians, Swiss, British and Russians. A new element is that, on the contrary of what would happen previously, the buyers are looking not only for houses for personal use but also as an investment opportunity. The types of buyers have also changed; millioners are interested as well as international hotel chains and cruise companies. In addition, the interest is not limited only to houses but expands to land as well. On the island of Rhodes, for example, an estate near the sea is accessible for an average German income of around 30,000 euros.
Unfortunately, Greek bureaucracy is an obstacle at the movement. The lack of national cadastre in regards to the entire country restricts the interest to regions like Dodekanisa, where the cadastre was created at the time of the Italian occupation. Regions like Crete or Halkidiki on the other hand, where the property deeds are not so clear, are considered difficult and undesirable despite their natural beauty. Some buyers are reluctant to invest in Greece because of the complex tax system and the economic situation that the country is facing, while others just wait for the prices to get even lower.