TechNews
GreekReporter.com Greece Omonia Square To Get A Renovation

Omonia Square To Get A Renovation 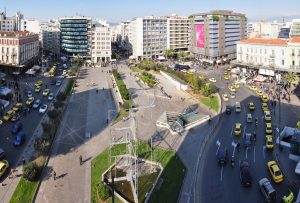 Municipality of Athens, in collaboration with KIPOKA citizens movement, are making an attempt to reform central parts of Athens, including Omonia Square.
They are trying to attract residents and shoppers back to the city center, now occupied mostly by drug addicts. It has been transformed into a sort of illegal immigrants ghetto.
Officials are trying to find ways of revitalizing the area, meeting with locals to discuss the future regeneration of the square.
“The mayor appears to have good intentions. I am optimistic about our future cooperation,” stated a local businessman.
One of the proposals discussed at the meeting is to allow businesses to place tables and chairs in the Square as a way to draw people to the location.
Formerly vibrant neighborhoods of Athens, particularly around Omonia, struggle with prostitution, drug dealers and addicts. Street crime since the Greek debt crisis began about three years ago.
Municipality has also announced another project to support the center. They rented buildings in order to house some addicts, allowing them to inject drugs under medical supervision.
“The big challenge, however, is to bring people back to the center; not only as visitors but also as residents,” George Kaminis, mayor of Athens, told the media.
(Source: Kathimerini)