The Holy Week is coming to its end, and unique traditions from different places across Greece enter the spotlight once again, adding a magical sense in the springtime festivities. Traditions that date back to time, customs only met in the Mediterranean country and delicacies baked to end the 40-days long Lent, form the best recipe for a wonderful Greek Easter experience across Greece.

Easter, or Pascha in Greek, is the most important religious holiday of the Orthodox Church marking the resurrection of Christ and the chance of rebirth for mankind. When the clock strikes 12 on Easter Saturday, people tell each other Christos Anesti! (Christ is risen!) and Alithos Anesti! (He is truly risen!) as a response, while they bring back home their lit candles to bless their house and symbolize the Light’s return to the world. After enjoying the magiritsa, the challenge of the red eggs awaits everyone. The breaking of the eggs symbolizes Christ breaking the Tomb and defeating Death.
Falling always on a different date, Easter signals the end of the cold days of winter and the beginning of the sunny and warm days of summer. But not every place in Greece celebrates Easter in the same way…
The Corfiot Easter 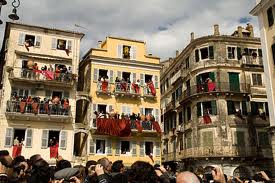 The celebration of Easter in Corfu is a unique experience, completely different from anywhere else in Greece, and particularly impressive for first-time visitors to the island. It is a huge festival, in which various components come together harmoniously: the Orthodox Christian faith, pagan traditions, the powerful presence of Saint Spiridon, the Roman Catholic community, the Venetian influence, genuine Corfiot humor, the music of the philharmonic bands and of course, the spring atmosphere.
Friday is the day of the Epitaphios, the funeral of Christ. All over the island, as all over Greece, every church brings out its own funeral bier and parades it around the parish. In Corfu however, the attendant philharmonic orchestras and choirs, the presence of thousands of Corfiots as well as foreign visitors, give another dimension to the gravity of the occasion.
On Holy Saturday at 11am, the First Resurrection and the “Pot Throwing” custom take place, with local people throwing pots out of their windows, smashing them onto the streets below to exorcise death and the evil spirits.
In the evening, before the Orthodox ceremony takes place, the Catholic service at the Duomo Cathedral takes place. With the participation of all Church officials, the Resurrection service finishes at 11pm to permit the clergy time to prepare themselves for the Orthodox service. In the town of Corfu, the service is held in the Upper Espianada Square, starting at the Church of Agia Paraskevi, with the participation of the Bishop, the philharmonic orchestras and thousands of people.
The Resurrection is seen with a roll of drums and an impressive fireworks display. When this ends, the bands traverse the streets of the town at a great pace playing cheerful music, with people running behind them singing.
The Resurrection is celebrated and the Lenten fast is broken with chilikourda (the local Easter soup of magiritsa – lamb intestines), red eggs, fogatsa (brioche), columbines (a special bread of Venetian origin, baked in the form of a dove) and lots of wine.
On Easter Sunday morning, churches in town that possess an icon of the Resurrection parade it around the central streets, something well worth seeing.

The Rocket War of Chios 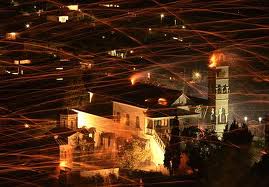 Vordados village, also called Vrontada, is a village located about 5 km north of Chios Town. It is in the center of the Municipality of Homeroupolis. Every year on the evening before Easter, the night sky gets lit up with thousands of flashes.
Rouketopolemos, or Rocket-War, is the name of this unique local traditional event held annually at Easter. In a variation of the Greek habit of throwing fireworks during the celebration of the midnight service before Easter Sunday, two rival church congregations in the town perform a rocket war by firing tens of thousands of home-made rockets across town, with the objective of hitting the other church’s bell tower. The rockets are wooden sticks loaded with an explosive mixture containing gunpowder and launched from grooved platforms.
The two rival parishes are St. Mark’s and Panaghia Ereithiani, the respective churches built on two hilltops about 400 meters away from each other. Direct hits on each belfry are supposedly counted on the next day to determine the winner, but each parish invariably claims victory over the other. The result of this apparent disagreement is that both parishes agree to settle the score next year, and the rivalry is perpetuated. The church buildings themselves and the nearby buildings have to be extensively boarded up and protected with metal sheets and mesh for the occasion.
The origin of this event is unclear, but local tradition holds that it goes back to the Ottoman era. According to local lore it was earlier performed with real cannons, until Ottoman authorities prohibited their use in 1889.

The Arachova St. George Fest
The small mountain village of Arachova is not only popular for its winter attractions but hosts a unique custom for the Easter time.
The icon of the local protector, St. George, is  carried the second day after Easter Sunday throughout the village, and a three day fest is  organized to honor the Greek Orthodox saint.
During the fest, some 500 locals wear traditional costumes and gather at the courtyard of the Holy Church of Saint George. The elder people then dance the “Panigyraki” (small fest) traditional dance to the of the bagpipes and the snare drums. Then, the young and the old inhabitants of Arachova participate in an uphill race towards the headquarters of Mustafa Bey. The winning prize is a living lamb. 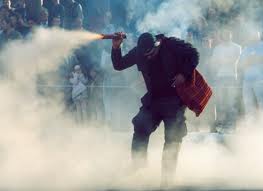 The town of the Prefecture of Messinia is well known for its “Saitopolemos” custom dating back to the revolution fights of 1821, when the people of Kalamata used the Saitas (a type of firework that makes loud noise) to startle the horses of the invading Turkish army, and thus, win the battle.
The Saitas are hand-made of filled up paper tubes and powder. On Easter, a group of men wearing traditional costumes carry the Saitas and detonate them while they are in their hands.

The Burning of Judas in Metres
Every Holy Thursday, in the small town of Metres in Thrace, the children walk from door to door asking for sticks to build the wooden model of Judas. The model will burn the following day after the Epitaphios is over and the priest reads the relevant chapter from the gospel. The locals will then light a fire, “burn Judas,” and scatter a handful of ashes on the tombs.
On Holy Saturday, the entire community attends church to chant the Christos Anesti and watch the fireworks’ display.

The Easter dances of Ierissos 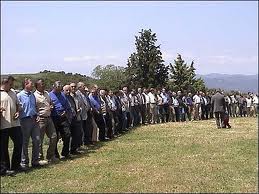 In the village of Ierissos in Chalkidiki, locals gather on the third day after Easter at the homonymous hills to relive the custom of “The Field of the Doomed Youth” (Tou mavrou yiou t’ aloni). The elderly people start dancing and then everyone is invited to join hands in a dancing circle extending for some 400 meters.
The Easter songs continue throughout the day and the custom comes to an end with the “Kageleftos” Dance, which represents the slaughter of 400 locals by the Ottomans during the 1821 revolution. The dancers pass under an arch made of laurel leafs and the raised swords of two young men. In the middle of the dance, the performers change their steps in order to look at each other for the final greeting.
The local traditional “zografitikos” coffee boiling in a large cauldron, tsourekia and red eggs complement the day. The dance is repeated again in the afternoon in the central square of the village.