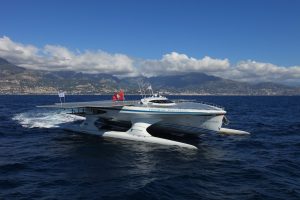 “Tunar Planet Solar” is anchored these days at the port of Zakinthos as part of its travel around the globe. With its 32m. width, its 15m length and its fins, fully covered with photovoltaic panels covering a surface of 500 sm, it is considered the biggest solar ship in the world.
It is the first time that such a ship attempts a long trip, but ”Tunaror Planet Solar” is used to difficult challenges. It already has the record of crossing the Atlantic twice as fast as any other ship of the same type due to its autonomy to fuel and the fact that it is very light. The unique ship was built in Germany, and began this recent trip with Monaco as its first destination.
It took ten days to reach the Canary Islands through the channel of Gilbratar and then it crossed the Atlantic until the Netherland Antilles. After a 12 day journey, it reached Miami and in January 2011 the ship entered the port of Panama. Then it was time for the Pacific to be ”conquered” with stops at the ports of Brisbane, Hong Kong, Singapore, India and the Emirate of Abu Dabi. After a long journey of 559 days and 31,189 miles, ”Tunaror Planet Solar” reached the blue Ioanian Sea.
The crew consists of only six people and the trip costs 12 million dollars. After Zakinthos, the ship will end its adventure back in Monaco.