Bike Sales Increase in Greece During Time of Economic Hardship 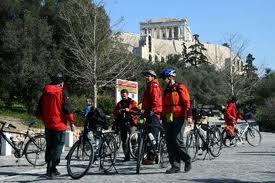 According to the National Statistical Service of Greece, bike sales have increased by 20-25% during 2011, while many buyers are new riders.
“In 2011, almost one bike store opened per month in Athens,” says town Counselor George Amyras. “There are about 5,000 active bikers using their bicycles as their everyday means of transport,” he continued.
As a result, many new job opportunities have opened up. And in addition to protecting the environment and keeping someone’s physique healthy, bikes limit families’ expenses and this is one undoubtedly great advantage. Gas prices in Greece range from 1.7 euro/litre to 2 euros. On the contrary, riding a bike costs almost nothing.
According to reports of the EU, 80% of the distances covered by a European citizen everyday are about 5-6 km.
In Greece, however, car drivers do not pay full attention to bikers and since there are only a few cycle lanes in Athens, this could be dangerous. But the government encourages people to transport their bicycles by bus, or even by metro.