GRNews
GreekReporter.comAustraliaThousands of Australians to Visit Lemnos on ANZAC Day

Thousands of Australians to Visit Lemnos on ANZAC Day 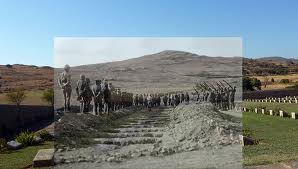 On April 23, 2012, Lemnos island will be full of Australian MPs and citizens to honor the Australians and New Zealanders soldiers who died in Greece during World War I.

Some Greek expatriates, in cooperation with the Australians, have organized the trip to Lemnos – Victorian MP Lee Tsarlamis, the President of the Victorian Parliamentary Friends of Greece, Martin Foley, and Labor MP Yannis Pantazopoulos are just a few.

Every year, on April 25th, Australians honor casualties of World War I and II. Australian Embassies all over the world organize the commemoration of ANZAC Day, also known as Australian and New Zealand Army Corps, referring to people who fought in Gallipoli Peninsula during the Great War. Many of them died, but some found a shelter on Lemnos, where there are two Australian cemeteries today, a war memorial and two roads named after them, to remind people of the Australians’ stopover on the island.

In Australia, there is also a small town called “Lemnos,” as well as a hospital with the same name in Western Australia, showing honor of friendship and support.