Greek Schools in Germany Close Down? 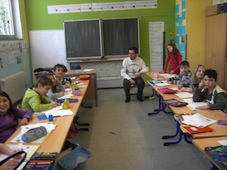 Greek expatriates in Germany became concerned when they heard about the suspension of some Greek schools’ that were up and running. Greek government, however, unofficially announced that all these students will probably be back to school next year.

No one is aware of the reasons of this decision. “There has never been an official statement,” commented a Greek student living in Germany. He mentioned in an interview given to a big Greek radio station, that only in Munich are there nine Greek primary, two middle and two high-schools operating, with about 3,000-4,000 students in total.

President of the Association for Greek Communities of Germany, Costas Dimitriou, stated that this came as a result of a law put in force during Fofi Gennimata’s term of office as Minister of Education. “During the years 2010-2011, Gennimata passed a law about the Greek schools of Europe. No more students would be accepted by our schools and as a result, they would close after 2-3 years. This is something everyone has been expecting to happen since then,” added Dimitriou.

Greek government does not send books to Germany any longer. That unavoidably leads to lower quality of the studying procedure. “Even the parents offer money to contribute in schools’ expenses,” stresses Dimitriou.

We hope that nothing negative happens in the end!