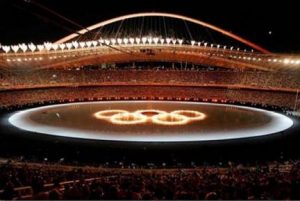 The Belgian newspaper De Morgen published a reportage from Athens, under the title “Olympic Sorrow.” The Belgians stress the fact that every aspect of Athens has fallen into disuse over the past years.

“Nothing has been left behind the glory of Athens 2004,” mentions the Belgian newspaper, adding that “this country collapses under the pressure of the financial crisis.”

“The view of the once almighty, but now completely devastated Olympic stadiums reminds us the vanity of the Abderites,” adds the journalist.

And Abderites, as you may know, were the residents of Abdera in Thrace. Many jokes of the time were mentioning them as vain and foolish people; even Cicero was one of them who shared this opinion.

“The great amount of money spent for the Olympic Games 2004 was one of the facts, among many others, that have led to the present financial problems,” says the newspaper. “Greeks got mad about the Games, a fact that is fully controversial to today’s Greek society. The standard of living in Athens is not so high as it was,” comments the editor of the paper.

He came to Greece in order to see the situation with his own eyes. He discussed with some Flemish people living in Greece as well, and talked to people once working to these stadiums. Lampis Nikolaou played a very important role during the Games, so he gave a mini-interview to the Belgian publisher to explain from his own point view what happens nowadays in Athens and Greece in general.

De Morgen concludes that it was really irrational for the Greeks to organize such a spectacular festival while the country’s  financial situation had not been very strong, as we later discovered. “The stadiums,” he says, ” have never been used again by anyone, and slick people looted them, without ever being arrested.”