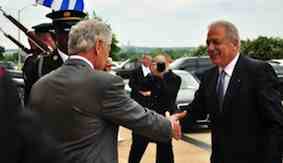 What Greece has long been waiting for was not what the Americans decided to offer.

Hoping for investments, the Americans instead offered Greece some significant military help, including almost 400 battle tanks of Abrams style and 700 caterpillar M113 armored personnel carriers. We do not have to pay a dollar, not a euro, to buy them. They are either some American army stock, or tanks about to be pulled out of the USA’s army. Are they useless? No, but the Americans decided to reorganize their armed forces.

Diplomatically and politically speaking, this offer is not something done unintentionally. It is actually a posteriori “thanks” for the important contribution of Greece to the USA, while the Americans were facing problems concerning Libya. Moreover, Greece helped them protect the sea roads and the national nagivation of the country by resisting the Somalian pirates.

This decision was announced after US Defense Secretary Leon E. Panetta and Greek Defense Minister Dimitris Avramopoulos met in Washington.

But Greek military officers stress that it is “not helpful” if Greece financially undertakes the transfer of the 1100 armored vehicles. They are now looking for any Greek ship owner willing to transfer the tanks to Greece without getting paid.

The Greek Defense Minister stated after the meeting that, “Mr. Panetta assures that the USA will offer Greek armed forces implicit help if ever needed.”