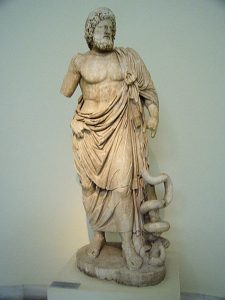 It was a matter of luck that Greek archaeologists discovered a so far unknown santuary. Supervising archaeologist Maria-Fotini Papakonstantinou told  “The Times of Malta” that it has been “a race against time” for them to study and transfer the findings.
Time was their enemy, as the bulldozers constructing the new Patras-Athens-Thessaloniki highway needed to carry on their work.  Had it not been for the construction work, the sanctuary to Asclepios may have remained under the Earth’s surface for ever.
“In six months we carried out work that could have taken at least two years”, added Mrs. Papakonstantinou.
The sanctuary to Asclepios was found 200 km north of Athens, near the present city of Lamia. In the ancient times, this was the location of the port town Dafnounta. Moreover, its size, 30 by 15 metres, confirms that it could absolutely not have been part of a big city.
Thanks to the discovery of snake-shaped findings, probably offerings to the God Asclepios, jewels and shards with the God’s name carved on them, the scientists have undoubtedly concluded that this was a sanctuary to him.
Asclepios was the God of medicine and healing. His daughters were Hygieia (the Goddess of health, Iaso (the Goddess of recuperation, Aceso (the Goddess of the healing), Aglaea (the Goddess of Magnificence) and Panacea (the Goddess of universal remedy). Their father’s divine symbol was a snake-entwined stick, which remains even nowadays the symbol of Medicine.
The sanctuary dates back to the 5th century B.C. and is considered to be the best preserved find in Greece.
Mrs. Papakonstantinou added that the sanctuary was removed stone by stone to another location, close to the highway.