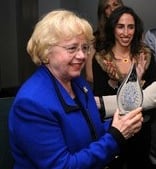 Pinelopi Tsilas, wife of Executive Director of the Onassis Foundation in New York and Ambassador Lukas Tsilas, was honored for her creative contribution in promoting Greek cultural heritage and language in America as well as her humble charity activities.

The Association of Greek American Professional Women (AGAPW) awarded Pinelopi Tsila with the title “Greek-American Woman of the Year” on the occasion of the Women’s History Month Celebration.

Dr. Olga Alexakos, President and Founder of A.G.A.P.W., referred to Tsilas’ valuable work and pointed out that “Ms. Tsilas is a strong woman who has offered a lot to others.”

P. Tsilas warmly thanked AGAPW for honoring her and expressed her deep gratitude.

She stressed that most women struggle to cope with life and their sometimes difficult circumstances while trying to harmonically combine their multiple – often contradicting– tasks. She also referred to the hard economic situation in Greece, pointing out that such times demand our solidarity and sympathy.

She also thanked her husband, two children, and five grandchildren.

The presentation of The Outstanding Female Student of Greek Descent Scholarship to Alexandra Kavoura ($3,000) was another touching moment of the event.