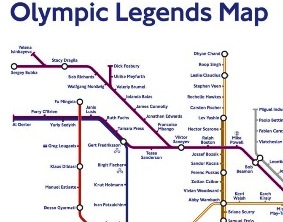 Some renowned Greek Olympic champions have recently moved to the London Underground!

Neither the 2012 Olympic Games that take place in London, nor the financial crisis have forced Pirros Dimas and Spyros Louis to immigrate. What’s the reason then? The organizers of the London Olympic Games decided to rename 362 stations of the British tube. Olympic medalists, each of whom has played a major role in the Games, gave their names to the stations.

The people in charge of the Olympic organization have named the stations, which lead to specific stadiums, after the corresponding athletes; that is, the tube which heads for the football stadium, passes through the “Lionel Messi”, “Samuel Eto’o” and “Ferenc Puskas” stations.

The Greek “representatives” are Spyros Louis, the first Marathon winner, and Pirros Dimas, who has won 4 Olympic medals. The latter’s name leads to the weightlifting stadium.

Even some central stations, such as the one called “Victoria”, have been renamed. This station is now called “Usain Bolt”, while the terminal is dedicated to the weightlifter “Vasily Alekseyev”.