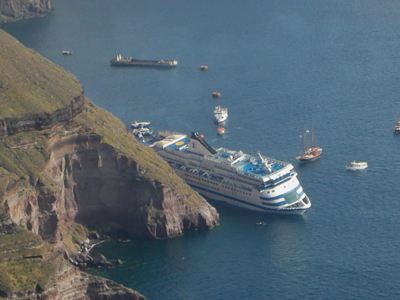 A total of 13 people are set to stand trial in connection with the sinking of the Sea Diamond cruise liner off Santorini in 2007, after a prosecutor recommended to a Naxos court that they face a series of charges for their part in the accident, which caused two people to drown.
Prosecutor Evi Salma recommended to the court that the 13 suspects be tried for breaching the safety of sea transport, manslaughter through negligence, causing sea pollution and breaching international safety regulations. According to Salma, as daily Kathimerini reports, the Sea Diamond hit a reef off Santorini following a series of mistakes and oversights by the crew.
She said that the vessel was only 50 meters from the coast when the accident occurred but should have been at least 285 meters away. Salma said that the reef did not appear on sea charts but the collision could have been avoided if the ship’s sonar and one of its three radars had been working.

The Fascinating 3,000-Year-Old Story of Greece’s Presence in Britain