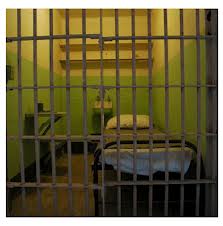 (Original story in Greek by Irene Papafilippaki)
For the past 15 years, Greek prisons have been changing. Not only did the number of inmates rise tremendously but also their “quality”, or type of offense, has altered. The reasons behind these changes are numerous, and have led the country’s correction officers to declare several protests and strikes from time to time.
Some of the most basic reasons include the rise of the crime-prone population due to the demographic changes of the country, the lack of sufficient prison facilities, and the rise in the number of people on trial.

At the same time, the number of convicted prisoners who have violated drug-related laws seems to be steadily rising as well. Substance abusers are currently making up half the population in Greek prisons, while what they actually need is treatment and not prison sentences.

And when it comes to the medical treatment of the inmates, then the Ministry of Justice and the state seem to be totally unaware of the rising and piling problems of the Greek prison system.

Thus, coexistence can become rather difficult between repeat offenders and persons who face the law for the first time, such as in the cases of substance abusers and debt owners. According to correction officers, the problem of several prison facilities shutting down in Greece was not addressed with the building of new premises, but was rather put aside with the “easy” transfer of inmates from one prison to another. The overcrowding of inmates has resulted in the poor function of each remaining prison facility, which in turn allowed the trafficking of illegal substances behind bars.

But who is supplying prisons with illegal substances?

Usually, it is convicted criminals who are smuggling illicit drugs into prisons. But they are not the only ones. Other offenders include the local Police Department and even the public prosecutor’s office.
On March 15, 2012, a 34-year-old inmate from the prison of Trikala was arrested for trying to smuggle drugs into the facility. The investigation of his cell revealed a nylon package containing 0.8 grams of heroine. In January 2012, the combined research of the local police in Trikala led to the arrest of a holder of illicit substances, who led the police to the formerly charged owner of a warehouse that housed significant amounts of dried cannabis. All detainees were brought to the public prosecutor of Trikala. Even correction officers have been forwarded to the prosecutor for illegal possession of substances such as cannabis.
At the end of the day, it seems like everyone is joining the “drug smuggling party” in Greek prisons. However, one should always bear in mind that not all prisoners are a threat to society. On the contrary, inmates are part of society and the state should provide them with the means and the chance to smoothly re-integrate after being released.