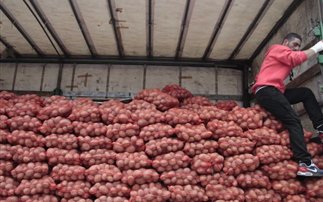 If one were to randomly ask a man on Greek’s streets whether he preferred local or imported tomatoes, he would almost certainly (along with the other 90% of those interviewed) opt for domestically-grown produce.
Moreover, according to recent surveys it has emerged that about 50% of Greeks believe that local products are better than imported ones, especially in terms of quality. However – as was shown in a recent study by the daily paper Kathimerini – Greece imports hundreds of tonnes of fresh produce every year, as well as fruit and vegetables easily grown on Greek soil (like oranges, lemons, apples and potatoes) and tonnes of meat and fish from all corners of the globe.
Last year, Greece, one of the world’s largest olive oil producers in the world, also imported large quantities of the product from Germany. In particular, in 2011 the country imported 5,650 tonnes of oranges (worth 3 million euros), 29,485 tonnes of lemons (for 19 million), 22,704 tonnes of apples (18 million) and 174,352 tonnes of potatoes (77 million). As concerns meat imports, Greece paid 382 million euros for beef, 354 million for pork, and 39 million for lamb and young goats.
Fish bills totaled 348 million euros. However, prices are being inflated in part by dishonest intermediaries. As concerns meat and fish, many wholesale traders re-label them as local products in order to better convince consumers to buy them, while at the same time selling them at two to three times the price paid.
The simplest way to cut down on this massive annual draining of funds would be to get rid of intermediaries selling products from abroad at lower prices than local ones, but this is easier said than done.
The main reason behind the high cost of imports is consumer behaviour, since the public wants to have all products available year round, whether it be the season for them or not.
For example, when the Greek apple season is drawing to a close, sellers begin importing them to support demand, while during the summer oranges become scarce, but a freshly-squeezed orange juice every morning is wanted by consumers, and so the country needs to give tourists what they want: through oranges bought from Argentina. Greek producers, on the other hand – like spoiled children or perhaps only victims of a system which does not take into account market demands – prefer to ignore quality in order to achieve the quantity that gets them state and European subsidies.
A typical example of this mentality is shown by most farmers in Laconia (the Peloponnese), who prefer to let their oranges rot on trees rather than sell them at a lower price – accustomed as they are to receiving subsidies for their fruit independently of the quality.
However, on account of the economic crisis now, state subsidies have dried up, Laconia oranges pale in comparison with their competition, and are no longer able to compete with the market of imported ones. On the subject of meat, very few butcher’s shops in Greece admit that they sell imported products.
And so it is unclear what happens to the 102,036 tonnes of beef bought from France, the Netherlands, Germany, Italy, Denmark, Spain, Belgium and Poland. Pork is also always ”Greek”, and so one wonders who consumed the 194,281 tonnes of the imported variety. And there are an infinite number of other such examples. Of course, selling directly to consumers is no easy task, but some have begun trying.
This was proven by the recent resounding success of the ”potato movement” in which many farmers took part, bringing hundreds of tonnes of potatoes and other agricultural products to Greek city squares to sell them at the price they actually cost to make.
(source: Kathimerini, ANSA)