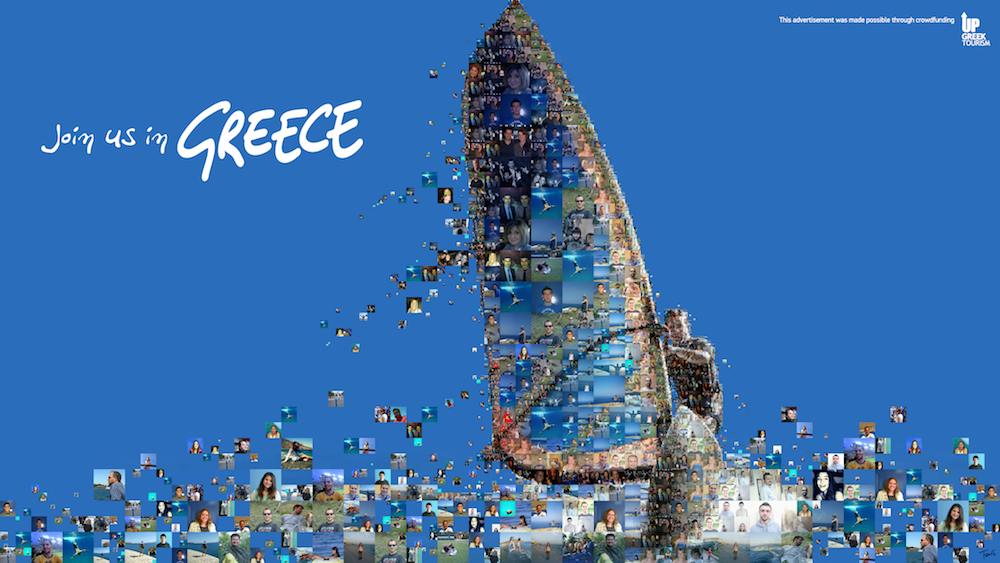 Starting on March 23rd and for 30 days after, if you happen to pass busy Times Square, stop for a few minutes and take a look at the Up Greek Tourism billboard, which will be placed between 46th and 47th Street. The billboard invites you to go to Greece, but a deeper message lays underneath this campaign for Greece.

Up Greek Tourism, a private initiative aiming to promote Greece as a tourism destination, will use this billboard to show what Greeks can do when they come together, and how private initiatives can really help Greece.

At this point in history it is what we – as private citizens – can do for Greece, and not what Greece can do for us. Greece has already done enough for us and the world.

The National Greek tourism organization had never thought to do something similar to this campaign since its inception, but the Up Greek Tourism volunteers organized a great online movement that  in just 20 days raised $20,352, surpassing its initial goal by US$5,352. The crowdfunding of the project started on February 12th and was successfully completed on March 4th.

The billboard was funded by 338 supporters who contributed to the project via loudsauce.com, a crowdfunded media buying platform. About 50 percent of the supporters were located outside Greece, including in Australia, Belgium, Bulgaria, Cyprus, France, Germany, Italy, Netherlands, Qatar, Russia Singapore, Spain, Switzerland, U.A.E, U.K. and U.S.A.

The animated advertisement was designed pro bono by Greek designer Charis Tsevis (known for Steve Jobs portraits made from Apple products). Tsevis has managed to feature, in the Up Greek Tourism Billboards, around 400 photos of people involved with the campaign.

The creative message reminds New York residents of the beauties of Greece as a holiday destination and asks them to visit Greece this summer. Greece remains a beautiful and safe vacation destination regardless of its economic situation.

With the kind support of a Greek-American friend of the campaign, the team managed to negotiate an electronic billboard in the heart of Times Square worth of US $45,000. This means that for every $1 contributed, the value is tripled in media exposure.

The campaign was started – and remains – as a voluntary project by Yorgos Kleivokiotis, Onic Palandjian and Stathis Haikalis. Up Greek Tourism may be seen in other cities of the world in the near future if finances allow.

Tourism accounts for 15-18% of Greek GDP and almost 20% of Greek employment. The media exposure of this initiative may contribute to tourist arrivals for 2012, but most importantly it has already contributed to our confidence as Greek citizens since it proves that if we can set our minds to something, we will achieve it. Let’s rebuild Greece, one person at a time!