TechNews
GreekReporter.com Greece Alexandroupolis' Historic "Kapnomagazo" to Be Restored by 2014

Alexandroupolis' Historic "Kapnomagazo" to Be Restored by 2014 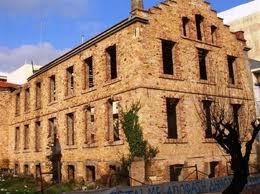 The restoration project of the historic “Kapnomagazo” (tobacco factory) of Alexandroupolis, in northeastern Greece, is expected to be completed by March 2014. The restoration contract was signed between the mayor of the city, Evangelos Lambakis, and the main contractor and CEO of “Kallitechnos ATE”, Charalambos Krambovitis.
“Kapnomagazo” is one of the best preserved industrial architectural designs of the late 19th century. The restoration project includes retention walls, foundations, concrete floors, roof reconstruction and complete renovation of the building, in order for it to become a new modern city library.
“It is a major historic project for our city, which will connect its past to its future” stated Mr. Lambakis after the signing of the restoration contract. On his part, Mr. Krambovitis noted that restoring such an important monument is a great honor for his company.
The restoration project had been abruptly abandoned in 2005 after the tragic death of three workers.
“Kapnomagazo” is located on Ainos Street in Alexandroupolis and is one of the few remaining monuments/buildings of the city that bring back memories from the 19th century. Built around 1890 by the catholic community of Dedeagac, the factory was first used as a school for the children of the community. In 1904, during class hours, the school’s laboratory was set on fire and a big part of the building was destroyed. In 1922-23 the basements of the semi-destroyed building gave shelter to Greek refugees from Eastern Thrace and Pontus.