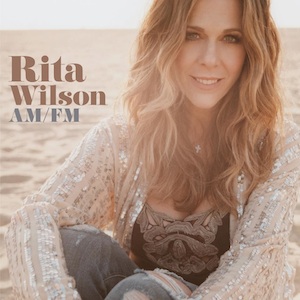 Although Greek-American Rita Wilson is well-known as an actress (It’s Complicated, Sleepless in Seattle, The Good Wife) and a film producer (discovered My Big Fat Greek Wedding, Mamma Mia!), few may be aware that her early show biz ambitions were actually musical.

Born and raised in the Hollywood Hills (nearly above the Hollywood Bowl), Wilson harbored dreams of becoming a singer in the 60’s and 70’s after falling in love with The Beatles, The Mamas & the Papas, Janis Joplin, and The Supremes, among others. She even took a part-time job as a ticket-taker at what was then the Universal Amphitheatre as a way to see such popular acts of the day as Linda Ronstadt, Joni Mitchell, Carole King, James Taylor, and The Eagles.

“I would watch these artists on stage and ache from wondering, ‘How can I get up there?’ How can I get to do that? ” Wilson recalls. “I had no idea how. I was a first generation American. We didn’t know anyone in the music industry. Acting and modeling kind of happened to me. I went with the flow because the opportunity was terrific and I could make a living, but I thought you had to play an instrument and be able to write songs to be a singer like so many of the ones I admired.”

Wilson has finally achieved her dream with the Decca Records release of her debut album AM/FM — an intimate, elegant, and beautifully sung collection of classics from the ’60s and ’70s that, taken together, make up the soundtrack to her life. “That time period was hugely influential on me as a kid and as a teenager,” she says. “I’d spend hours and hours lying on my bed, holding up the albums, reading the liner notes, and learning all the words to these songs that expressed exactly what I was feeling. They were like a little road map of human experience. Back then, we would even memorize the names of the musicians and photographers. There wasn’t a ‘thank you’ mentioned on a liner note that wasn’t studied and analyzed.”

Carefully curated by Wilson, her producer, Fred Mollin, and Decca Records’ Senior VP of A&R Jay Landers, AM/FM is filled with songs that resonate emotionally with Wilson. “I can remember where I was when I heard each one and what it meant to me,” she says. The album is essentially divided into two sections. The first half, “AM,” features songs from the ’60s that Wilson remembers singing along to on AM radio while riding in the back seat of her parents’ car and that recall the “lovely innocence and hopefulness of the time”: The songs include “All I Have To Do Is Dream,” (written by Vanessa Joy Amorosi, Mark Ronald Holden & Irmgard Klarmann), “Never My Love,” (written by Richard P. Addrisi & Donald J. Addrisi), “Cherish,” (written by Terry Kirkman), “Come See About Me” (written by Edward Holland Jr, Brian Holland & Lamont Dozier), “Angel Of The Morning” (written by Chip Taylor), “Walking In The Rain” (co-written by Phil Spector and songwriting team Barry Mann and Cynthia Weil for the Ronettes), “Wichita Lineman” (written by Jimmy Webb), and “You Were On My Mind” (written by Sylvia Fricker).

By the time Wilson got her own car (a Datsun 2000 Roadster) at age 17, popular music lived on FM radio. She became enamored with the folk-rock singer-songwriters who dominated those airwaves in the early ’70s and her favorite songs make up the “FM” half: “Good Time Charlie’s Got The Blues” (written by Danny O’Keefe), “Love Has No Pride (written by Eric Kaz & Libby Titus),” “Please Come To Boston” (written by Dave Loggins), “Will You Love Me Tomorrow” (written by Gerry Goffin and Carole King), “Faithless Love” (written by J.D. Souther), and “River” (by Joni Mitchell). “As I got older, I began to understand that not everything had a happy ending,” Wilson says, “so I was drawn to songs by women who wrote about how love was not always the dream fantasy; that there was pain and disappointment involved.”

“The song sequence on the album tells a story of a very innocent, idealized version of love in the ‘AM’ section, before it shifts to the ‘FM’ section and becomes more about the disillusionment that happens after you’ve had a couple of heartbreaks,” Wilson says.

“It also was important to me to choose songs that could stand on their own melodically and iconically. The songwriters were a very important part of the story I wanted to tell. I was looking for an emotional connection and songs that told a story.”

“When I was growing up, Emmylou Harris, Linda Ronstadt, Bonnie Raitt, and Dolly Parton would all perform on each other’s albums,” Wilson says.

“I remember thinking how great it was that all these wonderful artists would help each other out. There was a camaraderie and connection between them that I thought was very cool. I’ve always loved the idea of an artistic community where people collaborated.”

Making AM/FM, which was recorded last spring at the legendary Capitol Records Studio A in Hollywood, is a natural progression for Wilson. Over the last few years she has appeared as Roxie Hart in Chicago on Broadway, served as a producer on the film version of the stage musical Mamma Mia!, and recorded the song “Lessons Learned,” by Grammy Award-winning songwriter Diane Warren for The Trap, a short film Wilson directed as part of Glamour magazine’s “Reel Moments” series. AM/FM came about through conversations Wilson had with Landers about selecting songs to cover for a potential theatrical show. After hearing a demo of Wilson singing “Wichita Lineman,” Landers suggested she make an album instead and Wilson happily agreed.

“I had been missing out, professionally, on the connection I had to music,” Wilson says. “I said to myself, ‘If this is a dream of yours, you’re either going to do it or not do it, but you have to make a choice.’ And I’d gotten to a certain point where the desire to do it overcame everything else. It was almost as if I had to do it or I would regret it. As scary as it was to jump off the ledge, I loved the process. I loved everything about it: the recording, the musicians, the hanging out, the creative discussions. I’ve always loved people who express themselves through music. To me, music is a universal way that people connect. I feel very grateful to be doing this.”

See what Rita says about the making of her album:

You can listen one of  Rita’s songs below. Let us know what you think of Rita Wilson as a singer on our comments section.

You can hear Rita’s album on her facebook page and pre-order it on Amazon.