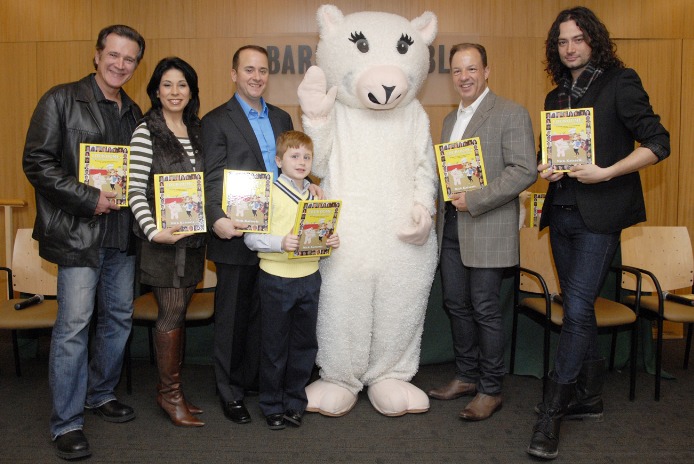 Nick Katsoris, the Greek-American author of the acclaimed and award-winning children’s book series featuring Loukoumi the fluffy lamb, has gathered the favorite childhood recipes of more than 50 celebrities in his delightfully illustrated new cookbook for children and their families, Loukoumi’s Celebrity Cookbook. A minimum of $2 from the sale of each book will be donated to Chefs for Humanity and St. Jude Children’s Research Hospital.

In Loukoumi’s Celebrity Cookbook, Loukoumi and her friends Dean the dog, Marika the monkey and Fistiki the cat are playing happily when they become hungry. At Loukoumi’s home they discover Fistiki’s Aunt Cat Cora, a character based on celebrity chef, restaurateur, and cookbook author Cat Cora, the first and only female Iron Chef, and President and Founder of Chefs for Humanity, which works to reduce hunger around the world. Aunt Cat offers to help them make her childhood favorite dish — Grandma’s Special Cream Cheese Cake. The story continues as Aunt Cat guides the friends in gathering and measuring ingredients and preparing them for the oven, all the while sharing child-friendly safety tips.

Loukoumi’s Celebrity Cookbook also invites children ages 4 to 12 to submit their favorite childhood recipe to Loukoumi’s Secret Ingredient Recipe Contest through April 6, 2012, to win a chance to cook that recipe with celebrity chef Cat Cora. The children will be asked to complete the statement: “(Recipe Name) is my favorite childhood recipe because… (in 10 words or less).” For details, please visit www.Loukoumi.com.

Nick Katsoris is the author of the iParenting Media Award-winning books Loukoumi, Loukoumi’s Good Deeds, Growing up with Loukoumi, and Loukoumi’s Gift. A practicing attorney and General Counsel of the Red Apple Group, Katsoris sponsors the annual Growing Up with Loukoumi Dream Day contest granting kids the opportunity to spend the day in their dream careers. He also rallies thousands of kids each October to do a good deed on National Make a Difference Day by sponsoring Make a Difference with Loukoumi Day. He resides in Eastchester, New York, with his wife and two children.

In October 2009, children’s book author Nick Katsoris visited St. Jude Children’s Research Hospital for the first time…and it changed his life forever. Katsoris, whose last 3 books in his Loukoumi series (www.loukoumi.com) have benefited the Hospital, met a beautiful little girl named Alivia. She was barely a year old and he will never forget the headband with the huge daisy that she was wearing. The two bonded instantly and Katsoris, who has a daughter Aliva’s age, gave Alivia the sole Loukoumi plush toy he had with him.

Katsoris read and signed books for the patients that day and realized his purpose for being there when the father of one of the patients put their hand on Katsoris’ shoulder and said, “Thank you for distracting our children.” That line was the hallmark of the day and is what has energized Katsoris to continue donating proceeds from his Loukoumi books to St. Jude. He is also in discussions with St. Jude to do something permanent at the Hospital in the form of a Loukoumi Story-time program so that his books and others can continue to provide a positive distraction for the children.

Two years have passed. This week, in order to save little Aliva’s vision, she underwent radioactive plaque implant surgery at St. Jude to combat the cancer in this now 3 year old girl’s eye. Just a couple of days later, Alivia’s grandmother highlighted on facebook a photo of Aliva with Loukoumi the lamb from the 2009 event. She then reached out to author Nick Katsoris to tell him that Alivia, who made such an impact on him in 2009, underwent surgery. She also told him how much the Loukoumi books meant to her granddaughter. She indicated that since there was a risk of Alivia losing her vision, her family wanted her to read and see as many books as possible while she still could. In fact, Alivia’s mother said that not a night goes by where Alivia does not request to have the Loukoumi books read three times.

Katsoris is grateful to these celebrities who have joined together for this “We Are The World” of children’s books, and together they hope to make more children smile like Alivia, the beautiful little girl with the daisy headband.