27 Τons of Halloumi Milk Spilt in Cyprus in Protest 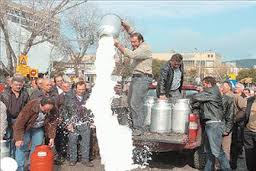 By spilling 20 tons of milk on Tuesday outside the presidential residence in the Republic of Cyprus, sheep and goat farmers continued their episodic protest over the prototype ratio of goat, sheep and cow milk used in the traditional product halloumi. Another 7 tons of milk were spilt in a field.
President of the Union of Goat and Sheep Farmers of Paphos, Evagoras Chrysanthou, told the CyBC that the dairy industry had informed him last Tuesday it would withdraw its request of mixed sheep and goat milk, leaving the farmers with tons of unused milk.
Yesterday, another 15 tons of milk were spilt, cutting off road traffic and causing minor incidents between the police and some 100 farmers. A farmers’ delegation met with undersecretary to President Christofias, Titos Christofides, who promised them that a final solution would be reached by Friday. Half of the farmers spent the night outside the presidential megaron.
The protesters took to the streets after the request to have halloumi registered as a designated product of origin (PDO) was withdrawn because of the lack of enough goat and sheep milk. According to the farmers, there is enough milk to use according to the prototype standards of halloumi but the government has been neglecting the branch’s and producers’ needs for a very long time now.
According to Cyprus-Mail, Agriculture Minister Sophocles Aletraris also met with the farmers’ delegation on Tuesday but there was no official promise made that halloumi will be made with at least 30% goat and sheep milk.