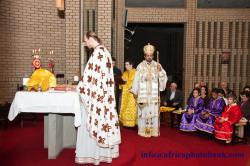 A Greek-British private school opened last month in Botswana, funded by the Orthodox Diocese of Botswana under the jurisdiction of the Greek Orthodox Patriarchate of Alexandria and All Africa.

Greek, Greek-Cypriot, Ukrainian, Russian, Serbian and indigenous pupils are already visiting the school’s courses, which among others include the learning of the Greek and Russian language and the local dialect Setswana, as well as Orthodox catechism.

Bishop Gennadios is in constant talks with the Ministry of Education of the country, aiming at upgrading the school to High School levels. The Embassies of France and Germany are also aiding the purpose of the private Orthodox school.

Through these efforts, the Orthodox Diocese aims at gaining a decent presence and activity at the country by organizing different activities and initiatives concerning the fields of education and health.

“It is of high importance for our Orthodox Church to be able to serve the people and the society of Botswana in key sectors such as health and education” pointed out Bishop Gennadios in his interview to major circulation local news magazine “Discover Botswana”. The Bishop added that the Orthodox Church’s future lies in education. “The best schools in South Africa and other neighboring countries belong traditionally and essentially to the Orthodox Church. People support our work by sending their children to school to become educated and learn about the Christian values. What our Church needs to do is come out of its shell and approach the people and their needs without too much preaching and philosophy” highlighted the Orthodox Bishop.

Bishop Gennadios gave interviews to well known “Animal Planet” and “National Geographic” channels and invited the journalists to participate at this year’s Orthodox Easter celebrations in order to experience the spiritual dimension of Christianity.

During Easter time, the first doctors from Crete are expected to arrive in Botswana in order to implement new pilot medical programmes against AIDS. These programmes will be conducted in cooperation with the Medical Clinic of the Anglican Church “Hospice-Holy Cross”, where children suffering from AIDS are being treated.

The Orthodox Diocese is celebrating this year its second anniversary from its establishment in October 2010. However, the Diocese does not have a Cathedral yet. Therefore, the Bishop will hold a new meeting with the authorities in charge to secure the right property where the first Orthodox Cathedral will be built.