GRNews
GreekReporter.comGreek NewsEconomyAiling Greek Banks Will Get A Bailout Too - $62.8 Billion

Ailing Greek Banks Will Get A Bailout Too – $62.8 Billion 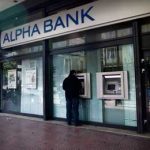 ATHENS – Awaiting $172 billion in a second bailout to save its economy, Greece will also get more than $62.8 billion in loans from the European Financial Stability Facility (EFSF) to recapitalize its banks, which will take $39.25 billion in losses as part of a separate deal allowing Greece to write down $134 billion in its debt. The bank scene in Greece has been rocky and Alpha Bank said it would pull out of a planned merger with Eurobank because of the debt deal.
Officials of the two banks had approved the merger four months ago, believing the new entity would be better able to cope with the country’s lingering economic crisis, which has caused record withdrawal of deposits and rising bad loans as Greeks, buried by pay cuts, tax hikes, slashed pensions and the coming firing of 150,000 public workers over the next three years, have been unable to pay their loans, despite pressure from harried banks and collection companies.
While Greece is writing off 74 percent of its debt and getting 30 years to pay back its loans at low interest rates, and the banks will be recapitalized, Greek consumers are being told they must pay back their loans in full and cannot get the same deal as the government, which said it doesn’t have the money to pay investors in full.
The debt swap deal between Greece and its private sector creditors, which was completed last week, caused much bigger losses to banks than expected when the merger was originally agreed. An official at Eurobank said the lender believed the merger would have been beneficial, according to Reuters. “We believed the deal made sense and had serious synergies but if Alpha does not want it, you can’t have a forced marriage,” the official said on condition of anonymity.
Those losses dealt a sharp blow to the banks’ capital adequacy, and forced them to seek government bailouts to meet regulatory capital requirements. Some banks said they feared they would be taken over by the state if they took too much money. Bank executives said they wanted to stay private and opposed any nationalization of the domestic banking system. “Ideas of placing the banking system under state control, directly or indirectly, equal backtracking. The Greek economy does not need a jump back to its statist past, but towards a competitive future,” Nikos Nanopoulos, Eurobank’s Chief Executive said recently.  He added that a restructuring of the economy needed a private, healthy and functional banking system and stressed that the role of individual shareholders cannot and must not be devalued.
Alpha Bank Chairman Yiannis Kostopoulos said that, “Banks must continue to be part of private sector of the economy even if they have to use, periodically, some state help to cover capital lost from a Greek bond haircut,” adding that it was necessary to change the climate in the country. “It is unthinkable to maintain a climate of uncertainty that leads deposits out of the country and makes borrowers unable to repay their debt.”
EFSF CEO Klaus Regling said the agency would need to borrow more as well to raise more funds to disburse to ailing Eurozone countries that use the euro as a currency, particularly Greece, whose crisis threatened to topple the financial bloc. The Greek rescue package means that the EFSF will be looking to financial markets more frequently as well as issuing bonds directly on a “non-cash” basis, Regling said. The fund expects to disburse more than $62.8 billion on a non-cash basis for Greece’s bank recapitalization efforts. Outgoing Finance Minister Evangelos Venizelos said he expects his nation to receive a $32.7 billion installment soon. The rest of the funds headed for Greece will be raised from financial markets, Regling said.
The European Central Bank is to take a hands-on role in Greece’s bank recapitalization body, in an unprecedented step. In a legal opinion published last month on Greece’s Hellenic Financial Stability Fund (HFSF), financed by the European Union-International Monetary Fund-European Central Bank (EU-IMF-ECB), the ECB said it would take part in observing the recapitalization fund’s board and attend its meetings. The ECB, as part of the so-called Troika that manages Eurozone rescues, is now setting up a permanent office in Greece to keep a closer eye on Greece’s progress in cutting its debts. In the legal opinion, the ECB also called for it to be given a say on who runs the bank recapitalization body.
(Sources: Kathimerini, Bloomberg, AMNA)