TechNews
GreekReporter.com opinion KONY 2012: Greek Aid Worker Exposes the Other Half of the Ugandan...

KONY 2012: Greek Aid Worker Exposes the Other Half of the Ugandan Story

Fragkiska Megaloudi lived in Uganda from December 2010 to January 2012. She worked as an aid worker in central and north Uganda and as a freelance writer.  Here she presents her side of the KONY 2012 story.

It seems that everybody talks about Joseph Kony these days. The famous video of Kony 2012 has more than 60 million views so far, quite impressive for a conflict that was once qualified as Africa’s neglected war. And suddenly the whole world discovered Joseph Kony and a video made by a US NGO calls for military intervention, so that white young Americans will feel good and some others will make good money. First of all, let me be clear about it.

I fully agree with Kony being put in jail for the crimes he has committed. The atrocities in northern Uganda and the neighboring countries have caused enormous suffering, and the wounds will need a generation to heal. Kony is a war criminal that has led a brutal insurgency for more than 20 years, forcing 1.8 million people from their homes and abducting more than 50,000 boys and girls to become fighters or forced “wives” to LRA members. In northern Uganda today, the conflict is over but its devastating consequences can still be seen.

To all of us who have lived and worked in northern Uganda, and who know a bit more than just the 30 minutes of footage, this video tells a whole different story.

Knowing all that, someone would argue that a video bringing awareness should be a positive step and we should all embrace it. Yes we should, if it actually was a video aiming to bring awareness to the conflict. But it is far from that.  A story of narcissism and belligerence that once again is being built upon the usual stereotypes: savage warlords, helpless Africans and white Americans that will rescue them from their self-inflicted misery.

First we should put some facts straight. Joseph Kony is a war criminal but he is not the biggest threat in the area. The group has not been operative in northern Uganda since 2006 and is now mainly hiding in the Central African Republic, south Sudan and the DRC. The group is believed to be fighting now for its own survival, with many high rank commanders surrendered or killed. The Ugandan Army has been accused of war crimes in the area, and the DRC has repeatedly asked them to leave its soil, accusing them of smuggling resources and several abuses of the local population. A US-backed military intervention that ended in disaster already took place in 2008 and had little effect in tackling the LRA. The UN has been present in the area almost from the beginnings of the conflict, as have several NGOs. 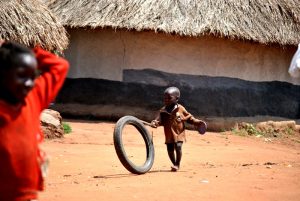 In other words, Invisible Children are far from being the only organization working on the LRA cause (and very far from being as effective as it is self-portrayed). I wonder if all those people who embraced the campaign ever realized that the LRA rebels are actually abducted children and that eliminating Kony wouldn’t change anything in their lives. A mass military intervention would have had dreadful consequences for the people in the area and for the same abducted children that it would have tried to free. Thousands would pay the price with their lives, so that some white people will feel that they “are part of the solution”.

Did all those people who embrace the campaign ever take 30 minutes to think what may have kept Kony at large for more than two decades? The first military strike, Operation North, back in 1986, created the conditions that gave rise to Kony.  We should not forget that Joseph Kony did not operate in vacuum. He was never captured because Museveni did not want him to be captured. Kony was doing Museveni’s dirty work in the north: killing the Acholi people, the northen tribes that has oposed to the guerila war of Museveni back in the 80s. And by 2005, the Ugandan government had forcibly moved almost 2 million people to refugee camps, where disease, rape and murders were on the rise. Yes, it was to protect them, but also to give their land away to land investors, to the military, to land speculators…Today the conflict over the land in northern Uganda is far from being solved, with thousands of people finding themselves destitute.

Did all those people ever think that the smuggling of resources, so that we can all communicate today on our iPad and iPhones and “like” the Kony video, has actually financed the conflict? That it was a good way for the Ugandan Army to get financial and military aid to “fight” Kony, and at the same time step into the rich soil of the DRC, where Kony allegedly was hiding.

And what do we have today? Social media calling for war, offering a perfect excuse to the US government to justify its military expansion in Central Africa. And thousands of young white Americans (that I doubt could have pointed out Uganda on a map before) are now urging the United States to militarize Africa, to bring in more weapons and to bolster the power of US allies in the area, without even questioning their human right records.