GRNews
GreekReporter.comGreece'Tango-Hasapiko, Dance of the Ports' Documentary To Be Presented At TDF

'Tango-Hasapiko, Dance of the Ports' Documentary To Be Presented At TDF 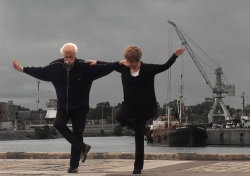 The Thessaloniki Film Festival presents the ‘Tango-Hasapiko, Dance of the Ports’ documentary film on the 9th and 10th of March.
The film explores the story of Jorge Dermitzakis, who is the son of Greek immigrants in Argentina. After many years of teaching and performing Greek dances on stage, in 2010 he presented his emblematic work Tango-Hasapiko, Dance of the Ports at the Teatro del Globo in Buenos Aires.
This performance uses dance to reflect the double identity of the Greek-Argentinean choreographer. The port, as a symbol of immigration and uprooting, also represents the crossroads of Argentinean tango and Greek hasapiko.
The documentary tells the story and nostalgia of Greek immigrants in Buenos Aires, and shows the collective effort which made possible the creating and staging of Tango Hasapiko.
(Source: http://tdf.filmfestival.gr)
Film Details: