GRNews
GreekReporter.comGreek NewsEconomyRising Percentage of Businesses Shutting Down in Athens

Rising Percentage of Businesses Shutting Down in Athens 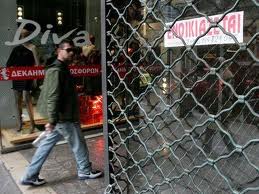 A total of 2,374 businesses have terminated their operations, out of a total of 9,274 enterprises operating in the Attica region, a report by the National Confederation of Hellenic Commerce (ESEE) stated on Thursday.
ESEE, in a report, said the situation in central Athens remained critical, with conditions worsening since the last six-month period, as the percentage of closed enterprises rose to 29.6 percent, from 24.4 percent in August 2011 and 23.4 percent in March 2011.
In Piraeus, this percentage rose to 27.3 percent, rising by 10 percentage points since March 2011. In Kifisia, the percentage of closed enterprises was around 23.7 percent, almost unchanged at the previous six-month rate, while in Glyfada, this rate remained at lower levels (18.8 percent).
Vasilis Korkidis, the president of ESEE, said the report showed a “sad reality”, but at the same time this was “helping everyone document a new development plan for Greek commerce”.
“This worsening of the survival index in the commercial sector, with a new wave of closings in the market, shows that the markets’ resistance is waning. Psychology and the image of the market is disappointing, but we have no right to let our work and sacrifices go wasted. We must continue the battle of daily survival and keep our shops open” said Mr. Korkidis.
(Source: AMNA)