TechNews
GreekReporter.com Europe Most Expensive Apartment In The World Sold To Greek Billionaire

Most Expensive Apartment In The World Sold To Greek Billionaire 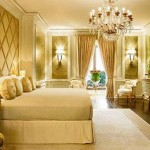 The six-bedroom penthouse in the pint-size European principality was sold for a record-breaking $312 million.

According to The Financial Times, the property — appropriately named La Belle Epoque — features all you would expect for the price, from a huge wood-paneled library to a spa and gardens, not to mention three en-suite bedrooms, each with a theater, kitchen, dressing room and two bathrooms.

The apartment once belonged to the billionaire banker Edmond Safra, who died in a fire in the place. Nicholas and Christian Candy, London-based real estate developers, bought it from Safra’s widow and embarked on a bit of a makeover, reportedly to the tune of $40 million, and then moved in themselves, ‘London Times’ reports.  As Architectural Digest reports, the Candy Brothers conducted extensive renovations on the penthouse totaling $40 million U.S. dollars before moving in, in 2008.

In addition to Monaco, Alexander-Goulandris reportedly maintains residences in Paris, London, Antibes, New York and Hawaii. He also owns one of the largest yachts in the world, the Dubai-registered, 279-ft. Delma, and jets around on a Boeing 767 and two Gulfstream G550s.

Greece is introducing new regulations for pet owners, sellers and stricter penalties for pet abuse in a new bill presented to Parliament on Thursday.
Crime