Boutaris Speech for the Documentary Festival 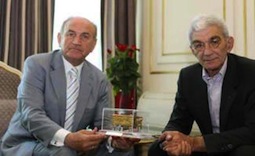 By Sevi Tsimaki
The mayor of Thessaloniki, Mr Boutaris pointed out that despite the difficult economic and social situation in Greece, it is essential to underline the importance of the Festival for the city. He thanked the artistic director, Mr Eipidis, for managing to create an outstanding Festival. This year is Thessaloniki’s celebration of 100 years of freedom, and the Festival will contribute to that by creating a library of movies which will be accessible to everyone. Boutaris is also the president of the Festival.
The artistic director of the Festival, Mr. Eipidis, said that they are not willing to sacrifice the festival for any reason. Despite the bad situation, Mr. Eipidis is determined that the Festival will be a huge success.
The well-known Thessaloniki Documentary Festival will open its doors to the public on March 9th. There is a growing interest in the Festival. The applications for participation were in the thousands this year. Bearing in mind the economic situation in Greece, it is safe to say that the applications for employment at the Festival were at least double, compared to last year’s applications.
Both the Film and the Documentary Festival are breaths of fresh air for the city. Each time they are organized, you can feel the artistic vibe in the atmosphere. People worry a bit less, and we all get in touch with the cinephile side of ourselves. It is encouraging to see young people being interested in the arts.
The ticket only costs 4E. If you are a student, unemployed or over 65 years of age you can watch the films for free if you enter before 15:00.
The 14th Documentary Festival has established some new features for this year. Through university servers, residents of other cities within Greece will be able to watch the Festival without having to travel to Thessaloniki. It is important to mention that some movies of the Festival will be shown at Penal Institutions of Kassandra, Patra, Volou, Koridalou, Larissas, Thiva, and Women’s Penal institution at Elaiona.
This year also, in cooperation with CERTH, a mobile application has been launched. This application offers the user the opportunity to be informed 24/7 about the Festival, the movies, and everything that is going on in the city regarding the Festival.
The movies are all exceptional, but there is one movie worth mentioning: The Dublin’s trap. It is a movie which focuses on the story of an Afghan who is seeking asylum. The film talks about the consequences of the EU migration policy Greece faces. It also sheds light on how austerity measures can cause social turbulence and a rise in nationalism.