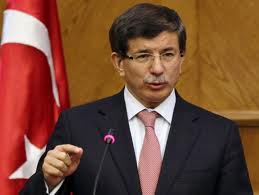 Turkish Foreign Minister Ahmet Davutoğlu said, during his meeting with Ecumenical Patriarch Bartholomew and religious leaders on Saturday, that the discussions about problems in the region aim at providing the assurance that religious tolerance exists in Turkey”.

During the press conference Ahmet Davutoğlu commented on the meeting with the religious leaders, stating: ” Our top priority is the democratic rights of religious communities in the region”.

Davutoğlu repeated that the Turkish government desired to move towards the harmonious coexistence of all religious communities in Turkey.

Davutoğlu’s statements provoke thought about the international issues that  Davutoğlu wants to discuss with Ecumenical Patriarch Bartholomew and the religious leaders. The main issue that rankles Ankara is the Syria issue.

The Turkish Minister, after the meeting with the Ecumenical Patriarch Bartholomew, will also meet with religious leaders of Armenians and Arab christians.

It was announced on Wednesday that Greeks have cut their smoking by more than one half over the last decade, according to a new ELSTAT survey.
Crime