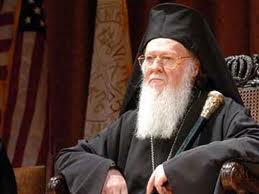 Ecumenical Patriarch Bartholomew praised Metropolitan of Messinia, Chrysostomos for his contribution concerning the interreligious dialogue between the Catholic and Orthodox Church.

Ecumenical Patriarch stated: ” Metropolitan of Messinia, Chrysostomos is a praiseworthy representative not only of the Greek Church but also of the Orthodoxy in general. Thus, we need him”.

Metropolitan of Messinia is now at Phanar, being the head of pilgrims of Messinia who came to Phanar.

Nikos Tzellos, a young musician from Rhodes, has made it his mission to revive the folk music of his island for the modern era.
Crime

A European arrest warrant was issued on Tuesday for Christos Pappas, the neo-Nazi former lawmaker, who is on the run after his conviction in October 2020.
Environment