GRNews
GreekReporter.comWorldAfricaPatriarch of Alexandria and All Africa Inaugurates First Orthodox School in Sierra... 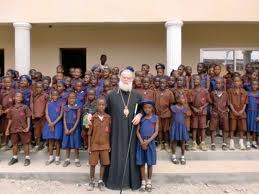 Patriarch of Alexandria and all Africa, Theodoros II, inaugurated the first Orthodox School in Sierra Leone, a country rising from the recent ashes of civil war. The School has been built in the courtyard of the Cathedral of St. Eleftherios, which is located in the country’s capital city, Freetown.

The Orthodox primate was warmly welcomed and applauded by 1,800 students that are currently visiting the School. During the inauguration ceremony, Patriarch Theodoros II thanked the Brotherhood of Orthodox External Mission of Thessaloniki, which undertook the project of building both the Cathedral and the School.

The Patriarch also congratulated the Principal and teachers of the School for their work and expressed his sincere hopes that this model school will mark the beginning of the Alexandrian Church’s contribution to the educational support of the young people in Sierra Leone.

The pupils and students of the School offered commemorative gifts to the Orthodox primate, who was obviously touched and in turn gave them stationery goods.

During his official visit to the West African country, Theodoros II also inaugurated the Educational Institute of the Diocese and the Journalists School, which is the first one to be established in the country. Moreover, he had a meeting with the Minister responsible for West Africa, issues and discussed regional problems and the plagues of AIDS and malaria.

During the Divine Liturgy in the Cathedral of St. Eleftherios, the Orthodox primate told the attending faithful to let go of the bitter civil war memories and look forward into a brighter future.