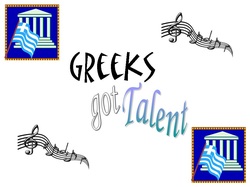 In the 7-11 year old category, 19 young people competed. In the 12-18 year old category, there were 21 contestants. The talented youngsters sang; some played instruments, like piano, bouzouki, guitar, cello and clarinet; while others danced. There was even a judo and a karate demonstration, a comedy duo, a yo-yo performance, and a cleverly staged version of “Karagiozi.”

Contestants were judged in several areas, including preparation, quality of the performance and more. Three winners were selected in each age group. In the 7-11 age group, 3rd place winner John Michael Burzawa, 11,  received a $100 prize for his skillful medley of Billy Joel hits played on the piano. In 2nd place, Austin Smith, 10, sang a rousing rendition of “Grenade,” by Bruno Mars, winning a $200 prize. Kristjan (Christos) Gudmundsson, 10, won the $500 first prize with a traditional Irish dance, performing with stunning precision.

In the 12-18 age group, Frankie Paganis, 13, secured 3rd place and a $100 prize with his soulful rendition of Paschalis Terzis’ “Exo Mia Agapi Mia Pligi.” Elena Stavropoulos, 13, won 2nd prize, $200, with her beautiful interpretation of “Sonatina, Op. 55, No. 3 I. Allegro con Spirito,” by Friedrich Kuhlau, on the piano. The winner was Arminda Downey-Mavromatis, 13, with her sweet and sassy take on Adele’s “Rumor Has It.” She won $500.

“We will continue to host this competition every year,” said co-chair Sonia Pylarinos. “There are so many talented young people in our community. We’re proud of each and every one of you.”