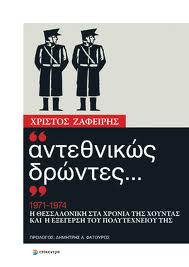 The Greek journalist Christos Zafeiris presents his own view and experiences concerning the Greek military junta and the students’ revolt against the colonels’ junta in his new book.
The new book is titled ‘Antethnikos Drontes, 1971-1974’ (meaning ‘Acting Unpatriotically’ in the English language) and was presented yesterday before the Union of Athens Daily Press Editors (ESIEA).
Christos Zafeiris stated that his book constitutes a book of memory. It explores historic events during the Greek military junta lasting from 21st April 1967 till July 1974.
Christos Zafeiris worked as a journalist in the city of Thessaloniki during the military junta in Greece, experiencing the social and cultural situation of those years and writing articles in order to inform Europeans of the situation in Greece during the junta.
The book ‘Antethnikos Drontes, 1971-1974’ is not a mere narrative for those who were against the junta, but moreover explores the behavior of junta officers, the economic situation, the surrounding atmosphere and the ignorance that most of the people demonstrated towards the military dictatorship of those years.