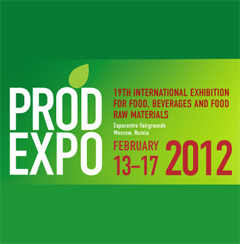 The participation of the Prefecture of Crete in the 19th International PRODEXPO 2012 in Moscow paves the way for the establishment of exports of Cretan traditional food products into the Russian market.

The expo, which is considered to be the biggest in the food and beverage industry in Russia and Eastern Europe, was hosted at EXPOCENTRE in Moscow, from the 13th to the 17th of February.

The Cretan participation aimed at promoting the local traditional products of the Cretan diet under the joint slogan “Crete”, and at the development of cooperation ties with bodies of the Russian market that will enable the promotion and distribution of Cretan products.

From the Prefecture of Crete 11 enterprises of oil, wine, dairy and pastry products took part in the Expo. They were given the opportunity to contact commercial representatives, food companies’ representatives, distributors and product promotion bodies of the Russian market, in order to update and build new cooperation contracts based on the Russian market needs and peculiarities.