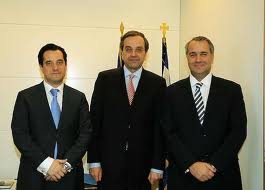 Greek Jewish leaders are expressing concern over the move by two far-right lawmakers to the leading conservative party.
Makis Voridis and Adonis Georgiadis resigned from the far-right Popular Orthodox Rally, or LAOS, and will run as candidates of the New Democracy party in April’s elections. New Democracy is leading in the polls.
The lawmakers, who have expressed or associated themselves with insulting anti-Jewish views, stepped down from LAOS after backing a national austerity bill against the party’s vote; the measure passed Monday.
The Central Board of Jewish Communities in Greece expressed Greek Jewry’s “concern and surprise” that Voridis and Georgiadis joined the New Democrats.
“We hope that the leadership of the New Democracy party, which is a leading Greek political party, will take all necessary measures so that such views remain at the margins of the Greek society, and will safeguard the equality of all citizens regardless of race or religion, as provided for by the Constitution,” the Central Board said in a statement. “Greek Jewry also believes that the same policy against racism and anti-Semitism, as endorsed by all democratic Greek and European parties, will continue.”
Voridis and Georgiadis served as ministers in the recent emergency government of Prime Minister Lucas Papademos, who made clear that whoever did not support the austerity bill would have no place in the government. LAOS voted against the package of reforms that is taking aim at Greece’s severe economic problems.
Voridis, 48, is a lawyer and former leader of the far-right Hellenic Front party who joined LAOS in 2005. Georgiadis, 40, is a publisher and author of books mainly related to ancient Greek history. Both were elected for the first time to parliament in the 2007 general election.
LAOS founder Giorgos Karatzaferis, a former bodybuilder, has made a number of anti-Semitic remarks on his television channel, Telecity.
At the founding congress of his party in 2000, he said, “They say that to get ahead you have to be one of three things: a Jew, a homosexual or a communist. We are none of these….Vote for a parliament without Masons, without homosexuals, without those dependent on Zionism.”
(Source:http://www.jta.org)