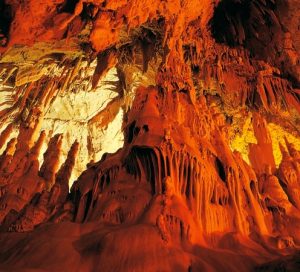 Workers placing new biological treatment pipes in the village Fodele of the Municipality of Malevizio, Crete, came across a magnificent cave of stalagmites and stalactites on February 14.
The workers immediately contacted the president of the local community, Mr. G. Fakounakis, as well as the Mayor, Mr. Constantine Mamoulakis, who visited the village along with the Vice Mayor Drakos Maris, officials of the local Municipal Enterprise for Water Supply and Sewerage, other Municipal services and the Municipality’s archaeologist, Mr. G. Tzorakis. The responsible Ephorate of Antiquities was also informed of the discovery although no ancient items have been revealed so far.
Archaeologists of the Ephorate scanned the field on February 16 to decide whether the cave covers all security measures in order to be included in the sites of the traditional village.
At the same time, for the protection of the passersby, a guard was placed outside the cave to prevent curious people or small children from entering the cave.
According to local Patris daily, the cave has already fuelled the locals’ imagination with lost treasures hidden inside of it. A group of teenagers has attacked the guard and the president of the community, while they attempted to enter the cave in spite of the security instructions and warnings.