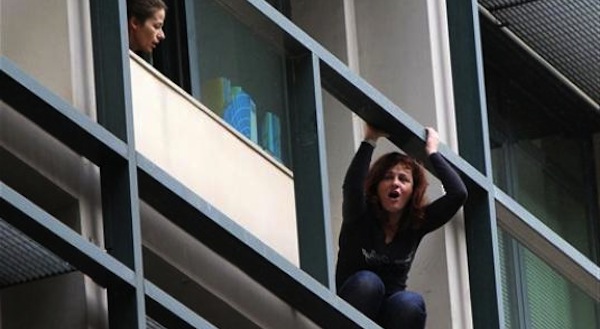 A Greek couple fearing for their jobs threatened to commit suicide by jumping from the window ledge of their office in Athens.

Both are now safe: the husband was first persuaded to come down but the wife remained for about five hours before going back into the building.
They work for a state owned housing company under threat of closure.
Exemplifying the plight of many people in the country, they said their pay had been cut and they had debts and a mortgage they couldn’t pay.
Other employees have also staged a sit-in protest.
Many state organisations are to be shut down under Greek austerity measures. Civil servants have had their wages, pensions and benefits cut; more than 15,000 are to lose their jobs this year.
[youtube]GX3Qaah7xlY[/youtube]
(source: euronews)