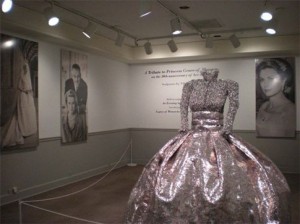 On the 3rd of February, the 25th Annual Gala, An Evening in Monte-Carlo and La Grande Fete was held at the National Museum of Women in the Arts in Washington. On grand display in the entry hall were sculptures crafted by artist Nikos Floros, who presented a tribute to Princess Grace of Monaco on the 30th anniversary of her death.

Inspired by the beautiful wedding dress worn by Grace Kelly for her marriage to Prince Ranier of Monaco, the sculptures took the form of haute couture fashion pieces crafted from aluminum soda cans.

Gilles Noghes, the Ambassador of Monaco, and Carol Lascaris, Endowment Co-Chair of the National Museum of Women in the Arts, applauded the originality of the sculptures’ materials.

Nikos Floros is an artist dealing with design and the creation of original sculpture costumes, combining haute couture with the art of sculpting, creating exquisite artworks. Using original materials in his projects, such as tins and newspapers, he has taken part in many exhibitions around the world, earning important distinctions.

His exhibition on the occasion of the Maria Callas Year in 2007, for the 30th anniversary since her death, was an important highlight in his career, where he presented twelve sculptures inspired by outfits of the great Greek soprano.

Nikos Floros was born in Tripolis in 1970 and grew up in Athens. He studied fine arts in Paris, returned for a few years to Greece and moved to New York in 1999, where he lives and works, while he often visits Greece.

From Delphi to Google: Ancient Oracle to Modern-Day Search Engines

AUKUS: US, UK and Australia Announce Pact in Effort to Stop China