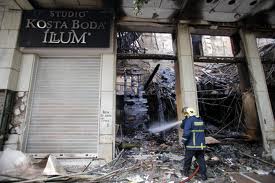 Fire, rage and looting were widespread all around downtown Athens on Sunday evening, while the Greek Parliament was voting on a new package of austerity measures that will further plague the people of the country with drastic cuts in payments and a new wave of dismissals.
45 shops in downtown Athens, including footwear and clothing shops, cafes, mobile businesses, super markets, jewelry shops etc. were completely destroyed by the fires set by protesters during last night’s violent incidents.
According to information provided by the Technical and Industrial Chamber of Athens, another 17 bank branches, four bookstores, five malls, 70 clothing and footwear stores and 29 other shops were also severely damaged.
The estimated cost of the overall damage is tens of millions of Euros and includes both the destruction of buildings and equipment as well as looting.
At the same time, the president of the Chamber asked for the enforcement of the law concerning compensations to the affected businessmen.
Not even the historic cinemas of Athens, Atticon and Apollon on Stadiou Street, managed to escape the ravaging demeanor of the violent groups of protesters who set it on fire. Despite the fire, however, the screening halls were reported to not have been damaged significantly by the arsonists.
Asty cinema on a nearby building in Koraes Square was also targeted by the protesters but was only set ablaze in its entrance.
Monday, at 20:00, members of the cultural organization “Every Saturday in Athens” gathered outside the Atticon cinema, holding candles in a silent protest against such attacks.
67 people were arrested facing charges of attacking police officers, causing damage to buildings and shops, and looting. Furthermore, another 75 people from different areas in Athens have been taken into custody and are being interrogated.