Maria Psomas is an exceptionally talented actress, playwright and acting coach who has worked in off-Broadway theatre in New York and also appeared in TV commercials as well as in movies. As an accomplished playwright, her work has been produced in New York and Minneapolis. Her short play “The Girl Show” premiered off-Broadway in New York in 2006, and her full-length play, “L.A. is Two Hours Behind” received a staged reading at The Playwrights Center in Minneapolis in 2001. Apart from being a classically trained dancer, Maria has also been certified by Ivana Chubbuck, (acting coach/author and founder of The Ivana Chubbuck Studio) in Los Angeles to teach The Chubbuck Technique, an acting method which Maria will explain in this remarkable interview:

Maria, I know you spend your time living in New York and Florida, but where are you from originally?

I’m a Midwestern girl. I grew up in Minneapolis, Minnesota, which is a vibrant arts community with the second-highest number of theaters per capita in the U.S., second only to New York City.

Do you visit Greece with your family and have you taught your daughter “Athena” to speak your native language?

Yes, my family and I have traveled all over Greece and we have a home in Eretria; the beautiful seaside town where my father was born which we visit frequently. I grew up in an exclusively Greek-speaking household, so I am fluent in Greek. But Athena is only 2, so the only Greek words she knows so far are “Papou” and “Yiayia”.

You have an impressive repertoire of exceptional talents. What would you say has been your career highlight so far?

I’ve experienced so many thrilling moments. Getting cast in my first commercial back in 1995, when I was still basically a kid (and getting recognized from it). When I auditioned to be a dancer for pop star Prince, and he cast me as a backup dancer for a Paisley Park music video. Signing with my first agent in New York, at the Carson-Adler Agency. Getting amazing reviews for the first play I co-produced in New York. The list goes on…

Tell me about your first performance off-Broadway and what it was like for you?

I had a small part in “The Vagina Monologues” by Eve Ensler. I was the first actress up on stage, so my monologue opened the show. It was playing at the old John Houseman Theatre, on Manhattan’s Theatre Row. During the run there was another show playing next door called “The Puppetry of the Penis”, so it made for an interesting evening of theatre.

After working on TV (commercials and music videos) and appearing on stage, which do you prefer?

Definitely the Stage. You have the ability to be physically freer because of the size of the medium. Also, the actor is granted a unique ownership of his role. In the theatre, the performance is truly your own. And of course, the energy of a New York audience is like no other. Live theatre feeds an actor viscerally and is an intense thrill.

How did you become a playwright and who or what inspired you? Tell me a little about the plays you have written. 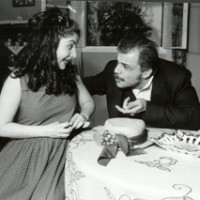 My undergraduate degree is in English so I was always writing. I studied Shakespeare, F. Scott Fitzgerald, Dorothy Parker, William Carlos Williams, and scores of other influential writers. My favorite playwrights are David Mamet, Patrick Marber, and Neil LaBute. Their plays lay bare an unsettling narcissism in social interactions, in love and in work. These are issues that intrigue me; the disintegration of social contracts, the disposability of human relationships. My first play, “L.A. is Two Hours Behind,” confronts some of these themes through the eyes of an ingenue climbing the Hollywood hierarchy. My second play, “The Girl Show,” which premiered in Manhattan, is a serio-comic exploration of the price of fame and the relative futility of retaining your morality in a success-driven world.

Now, I’d really like to hear about your involvement with Ivana Chubbuck in LA and how you came to be working together. Also, of course, I want you to explain the “Chubbuck” technique to me.

I first learned about Ivana when I was a drama student at Yale. I heard there was an acting teacher in L.A. whose techniques were so powerful and guarded that she didn’t even list her number in the phone book. Actors literally had to track her down through other actors, via word of mouth, like some sort of speakeasy… also “Monster’s Ball” was released in 2001, one of my all-time favorite films. The astonishing rawness of Halle Berry’s performance affected me on a cellular level, and it was Ivana who coached her. Berry won the Academy Award® for Best Actress for “Monster’s Ball”. I watched her emotional acceptance speech from my dingy studio apartment as a young struggling actress, and I cried along with her. So eventually, I sent an inquiry to Ivana. After she saw my credentials, she invited me to come to L.A. to be her student and learn the technique.

The Chubbuck Technique is an acting method that relies on using the actor’s personal pain to drive your character’s objective in a role. It is an intense, transformative approach to character study. It helps you get to the “gut” of a character, their heart and soul. It strips away artifice and reveals you. It is a life-changing approach to acting.

How are your own acting classes structured; scenes and the overall philosophy, etc?

My classes take place in a professional black-box theatre in Manhattan. We put up scenes from great movies and plays, and then the scenes are critiqued using the 12 Guideposts of the Chubbuck Technique. The actor’s personal issues are laid bare in pursuit of the truth of the character and every time it is, your performance improves. I’ve seen actors grow tremendously and start booking bigger and better roles because of studying the Chubbuck Technique.

When you first meet a student, can you tell right away if he/she has what it takes to become a successful actor/actress on stage?

I can tell almost immediately if he/she is game to take the journey – that is to say, to take risks, to expose themselves, to embrace their sexuality, to showcase their vulnerability. If they can do all that plus are willing to put in the work, because acting requires training, then they have a shot. 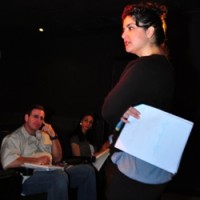 Apart from working as an acting coach for Ivana Chubbuck, are you working on any other projects right now?

I’m presently working on a TV pilot in Manhattan. I have had 2 days of filming so far. I can’t reveal the details, but it’s a great project backed by solid producers, and I can’t wait to see it completed.

Is there any burning ambition that you feel has been left unfulfilled?

I want Athena to grow up to be a happy and healthy person. Without that nothing else matters.

Finally, Maria, what advice would you give to young aspiring actors/actresses today? How can they succeed in such a competitive world?

Being an actor is hard. It’s an affliction you are cursed with, this need to perform. And the business has become much more competitive. Back in the olden day, agents and managers took the time to nurture young talent; now you’re very much on your own, which is a scary place to be. You’ll reach a point as a young actor when you want to pack it in, to give up. You’ll doubt your talent and whether you have anything to offer to this world. As Shurtleff famously said, “To go into acting is like asking for admission to an insane asylum – anyone may apply, but only the certifiably insane are admitted!” But it’s when you embrace your insanity and stop doubting yourself that success happens.

For further information on Maria Psomas & the “Chubbuck” technique: www.chubbuckclassesnyc.com

The American Author Who Fell in Love With the Greek Language