GRNews
GreekReporter.comGreek NewsEconomyClashes Outside Greek Parliament Ahead of Austerity Vote

Clashes Outside Greek Parliament Ahead of Austerity Vote 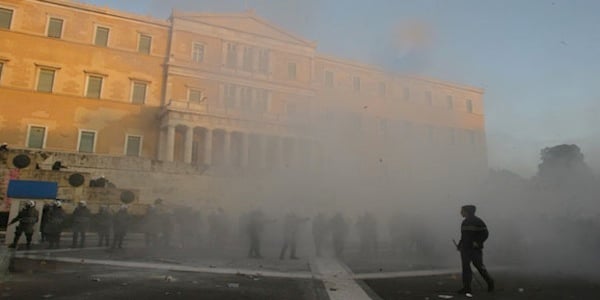 As thousands of demonstrators clashed with police outside on Sunday, Greece’s parliament debated painful austerity measures the country must take in exchange for a multi-billion euro bailout and debt restructuring program.
The loan-for-austerity package that will be voted on at midnight local time foresees steep spending cuts, sweeping structural reforms, and also outlines the terms of a separate debt-swap plan Greece has been negotiating with its private-sector creditors.
The austerity program must be passed in parliament–which seems likely given the government’s supermajority–if Greece is to receive a second, EUR130 billion bailout from its European partners and the International Monetary Fund.
The measures have stoked opposition from a crisis-weary population, especially with the Greek economy now stumbling through its fifth year of a grinding recession that has led to soaring unemployment and business bankruptcies.
In the city’s main Syntagma square, protesters played revolutionary music, banged drums and hoisted banners decrying the cutbacks and calling for revolution. Many chanted “thieves, thieves” at the parliament building.
Some 4,000 riot police were guarding the parliament building as dozens of hooded, self-styled anarchist youths attacked police amid a large protest in Athens’ main Syntagma Square, called by Greece’s unions to protest the new measures.
The youths hurled gasoline bombs, rocks and other projectiles at police, who responded with successive volleys of tear gas. There were also reports of street battles near the University of Athens located several blocks away from the main square.
(source: Dow Jones)