TechNews
GreekReporter.com World Africa Greek-Owned Ship Seized on Tuesday by Somali Pirates in the Gulf of... 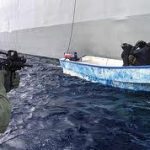 A Greek-owned ship with an all-Filipino crew was seized Tuesday by Somali pirates near Socotra Island in the Gulf of Aden, a report reaching the Philippines said.

The Liberia-flagged bulk carrer “MV Free Goddess” was sailing to Egypt from Singapore with its cargo of steel cables amounting to 19,475 metric tonnes, when a group of pirates boarded and commandeered the vessel.

According to the anti-sea piracy website, maritimesecurity.asia, the 22,051 dwt ship is manned by 21 Filipino seafarers and it remains unclear whether any of the crew had been hurt when the vessel was seized by the outlaws.

A separate report by the Somalia-based Somali Report website said the ship was seized some 110 nautical miles from Socotra Island by a group of pirates reportedly led by Abdhulkadir Mohamed Afwenye.

Based on information provided by maritimesecurity.asia, the MV Free Goddess was monitored and said to have drastically altered its course when it was seized by the pirates. The ship was originally sailing for Adabiya, Egypt.

The vessel was last reported to be heading towards the Somali coast.

The latest piracy attack and capture of crew members bring the number of Filipino seafarers in the hands of Somali pirates to a total of 47. The 47 Filipinos served aboard three vessels seized by the outlaws.