GRNews
GreekReporter.comGreek NewsEconomyToo Late to Save Greece? Most Greeks Think it Is

Too Late to Save Greece? Most Greeks Think it Is

By Andy Dabilis
February 8, 2012
Facebook
Twitter
WhatsApp
Linkedin
Email
ATHENS – Frustratingly slow talks among Greece’s leaders on whether to accept tough measures to keep international aid coming – which could push Greece into a Depression – or reject them – which could force an already-bankrupt country to default and jeopardize world markets – may already be a classic case of too little, too late to save the country that saved Western Civilization but now threatens to rattle its economies.
As interim Prime Minister Lucas Papademos, a former Vice-President of the European Central Bank, was shuttling between officials of the European Union-International Monetary Fund-European Central Bank Troika putting up $152 billion in rescue loans and offering $169 billion more with conditions of continued austerity, and his shaky coalition government, signs were everywhere that perhaps nothing can save Greece now. Even Eurozone officials have said they fear Greece is a “bottomless pit” and that they are tired of continued failed promises to implement reforms, such as privatization, to raise revenue and at least try to become self-sufficient.
The ratings agency Standard & Poor’s said even a 70 percent write-down in the country’s debt being negotiated as part of the second bailout will not be enough to stabilize the economy, whose deficit is a probably insurmountable 169 percent of Gross Domestic Product (GDP,) a black hole from which no country’s economy has ever recovered. Even if Greece gets the $170 billion, it will mostly go to international lenders and banks and Greek banks, and do little to aid Greeks suffering from 19.2 percent unemployment after 111,000 businesses closed last year, as deep pay cuts, tax hikes and slashed pensions have left many Greeks near-destitute and others too scared to spend. The anxiety is palpable.
A Nielsen survey released Feb. 8 showed consumer confidence has nearly evaporated, with 33 percent of Greeks saying they are almost out of money even as the government has doubled income and property taxes, raised the Value Added Tax to 23 percent and is even taxing the poor, while making a late charge to try to recover some $40 billion in revenues lost to tax evasion. Consumer confidence fell 10 percent from October-December to a record low. Some 90 percent believe the country will not come out of recession and 93 percent have changed their spending habits, drastically cutting spending on food, clothes, eating out, traveling and entertainment. Greek movie theaters are trying to lure people with reduced fares and two-for-one tickets but Greeks are staying home. 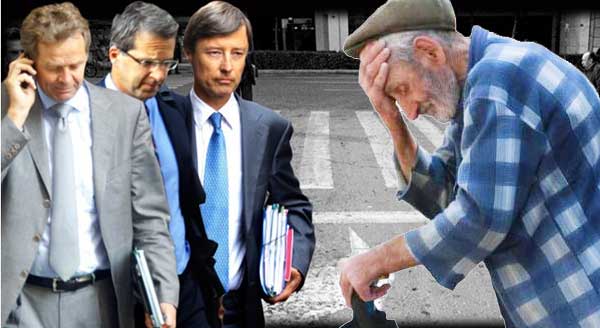 Scores of shelters operated mostly by the Greek Orthodox Church serve more than 30,000 meals a day and long lines queue for the free soup and bread. With wages for public sector workers cut 30 percent or more and the government planning to accept Troika demands to cut the minimum wage more than 20 percent and let private sector bosses set worker salaries, buying power will fall even further, and faster. While the austerity has worsened the economy, the Troika is demanding more of it, although a growing number of economists said the austerity measures have created a “death spiral” from which Greece can’t recover as it has a service-oriented economy with little productivity, and as a member of the Eurozone of countries using the euro cannot devalue its currency.
University of Athens Economics Professor Yiannis Varoufakis told NBC that it’s even worse than it seems. “This is Greece’s Great Depression. If you look at the statistics it is indeed a deeper slump than what Greece went through in the 1930’s,” he said. While most Greeks fear a default that could force the country to bring back the ancient drachma and cause economic catastrophe, Varoufakis recommended it. “This bailout is certainly not the answer for anyone, for Greece, for the Eurozone, for the world,” he told NBC. “Greece should default instantly, immediately, without any talk of leaving the euro,” he said.
Two years of protests, riots and strikes by workers have done nothing to change the government’s mind even though Greek and European officials said the workforce has to share the blame for a system in which there are hundreds of thousands of unneeded workers hired as political favors by political parties in return for votes, a patronage system that has killed Greece.
The numbers are numbing: