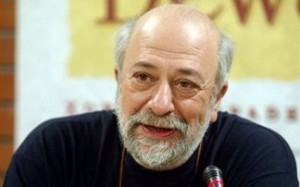 On the occasion of the Greek Letters Day and before a full hall in the Univeristy of Cyprus, Greek filmmaker Pantelis Voulgaris has expressed his wish to shoot a film on Cyprus.
The Greek filmmaker pointed out his love for Cyprus and highlighted the symbolic Cypriot participation in the production of his film “Deep Soul”.
In his speech on the theme “From a director’s notebook”, Mr. Voulgaris said he considered himself a lucky man for having chosen to become a filmmaker.
“All is ‘light’, inspiration drawn from painters. I have the light. I need to find the story. And I look for my stories in everyday life, because this is where the big theatre of art takes place” said Mr. Voulgaris.
Extracts from his films “Years of Stone”, “Brides” and “Deep Soul” were screened during the event, as well as a part from his documentary film “The Chronicles of Dictatorship 1967-1974”.
The opening speech of the event was conducted by the Dean of the University of Cyprus, Prof. Constantine Christofidis, who noted among others that Voulgaris’ work “reflects the personality of a true creator, of a true intellectual, who manages to depict the agonizing processes of the ever changing Greek society in all self-knowledge and perception of his spiritual duty and with a unique sensitivity towards the ordinary people”.