Superbowl XLVI: The Greek “Players” of the Game 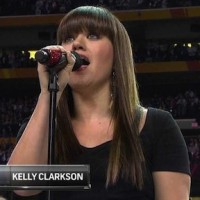 Kelly Clarkson sang the national anthem and John Stamos starred in the half time commercial for Dannon at the Superbowl XLVI.

Clarkson, backed by a children’s choir, belted a capable and lyrically-correct version of the song. Prior to Clarkson’s Super Bowl performance, country music power couple Blake Shelton and Miranda Lambert paired up for a duet of “America the Beautiful.

She is the third and youngest child of Jeanne Rose, a first grade English teacher of Greek descent and Stephen Michael Clarkson, a former engineer of English descent.

John Stamos was the face of the first ever yogurt commercial to air during the big game. Dannon decided to collaborate with the Greek-American actor, in order to promote their Oikos Greek Yogurt brand. The funny commercial aired during the 3rd quarter of Super Bowl XLVI. Watch it below: