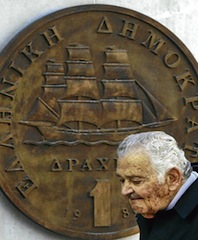 The majority of Germans feel the euro currency bloc would be better off if debt-crippled Greece left it, a poll published in mass-selling newspaper Bild am Sonntag showed on Sunday.
The Emnid poll said 53 percent of Germans surveyed thought Greece should return to its former currency, the drachma, while only 34 percent felt it should keep the euro.
Euro zone ministers had hoped to meet this coming Monday to finalise the second Greek bailout, which must be in place by mid-March to prevent a chaotic default, but the meeting was postponed because of reluctance in Athens to commit to reforms.
Without the austerity measures, which include cutting holiday bonuses and lowering the minimum wage in a country reeling from its fifth year of recession, the ministers say they cannot approve the 130 billion euro (108 billion pounds) rescue plan.
The Emnid poll said 80 percent of Germans surveyed oppose releasing the rescue package unless Greece implements the reforms.
(source: Bild, Reuters)