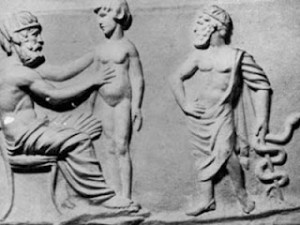 In 130 BC, a ship fashioned from the wood of walnut trees, bulging with medicines and Syrian glassware, sank off the coast of Tuscany, Italy. Archaeologists found its precious load 20 years ago and now, for the first time, archaeobotanists have been able to examine and analyse pills that were prepared by the physicians of ancient Greece.

DNA analyses show that each millennia-old tablet is a mixture of more than 10 different plant extracts, from hibiscus to celery.

“Medicinal plants have been identified before, but not a compound medicine, so this is really something new,” says Alain Touwaide, director of the Institute for the Preservation of Medical Traditions, which has the world’s largest digital database of medical manuscripts.

The pills, which researchers believe were diluted with vinegar or water to make them easier to ingest, were preserved inside tin boxes and were the size of coins.

“What is remarkable is that we have written evidence [from the ancient Greeks] of what plants were used for which disorders,” says Alisa Machalek, a science writer for the National Institute of Health, one of the world’s leading research centres.

“This research is interesting, especially for medical historians, because it confirms that what we eat affects our bodies.”

The shift toward synthetic chemical medicines occurred in the 20th Century, but according to Mark Blumenthal, the founder and executive director of the American Botanical Council, there is renewed interest in the medicinal benefits of natural foods – including those found in the pills.