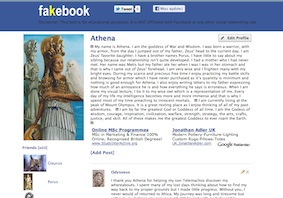 Fakebook is a Facebook lookalike website minus the social networking. Created as an educational tool about a year ago, it allows students to make profiles for literary and historical figures – without interacting with other users on the site.

On her profile, Pandora agonizes about having opened the box. “I am so ashamed,” she writes, “I’ve opened the golden box and thousands of little lizard-looking creatures escaped! I am so worried.”

Zeus, who according to his profile was born in 1971 BC, “is loving, being king of all the Gods,” but Hades openly disagrees.

“Shut up about that,” said a comment that he left on Zeus’s wall. “Ruling the Underworld is so much better.”

That’s what happened to ancient Greek gods recently when students were asked to make Fakebook profiles for the mythological characters.

“It makes it interesting and exciting for them. It’s doing a research and report, but it’s doing it in a new format,” said English teacher Jack Fraser from Westwood High School’s Junior Campus in St. Lazare, who had students pull gods out of a hat and fill in the date of birth, list of friends, and comments on their walls.

“They are going to have to use their imaginations – it’s an English class after all,” Fraser said, adding that, in a way, he asked students to think about what Zeus’s Facebook page would look like if Zeus were real. “But it has to make sense, it has to fit with the character.”

The “k” is not a typo – he is using Fakebook, not Facebook.