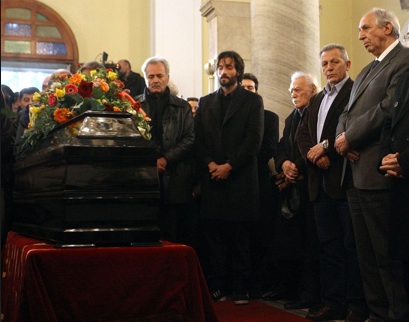 The funeral ceremony of the Greek filmmaker Theo Angelopoulos was held at the first cemetery of Athens, where politicians, friends, and relatives of the filmmaker as well as members of the general public, congregated to bid goodbye to the soul of the beloved Greek.
Theo Angelopoulos’ wife and daughters seemed to suffer great mental anguish over the death of their beloved. It was hard for them to accept that Theo is no more among us.
The Italian director and actor Toni Servillo also attended the funeral ceremony of Theo Angelopoulos. Servillo was attached to star in the new film ‘The Other Sea’ from Greece’s best-known director. Many actors, political representatives, and people who were working for the shooting of the ‘Other Sea’ were also in attendance.
Furthermore, poems written by the Greek director were read during the ceremony, while attendees sang the filmmaker’s favourite Greek folk song ‘Kontoula Lemonia’. Eulogy speeches were given in honor of the Greek filmmaker, that made most of the attendees of the ceremony burst into tears.
After a decision taken by the Greek Minister of culture Pavlos Geroulanos, the funeral ceremony was held using government expenditure.
Angelopoulos died on January 24 of injuries suffered in a traffic accident near Piraeus, Greece, during the filming of his last movie, The Other Sea, about immigration and the crisis in contemporary Greece. He was 76.
Angelopoulos was considered one of the most eminent directors of the second half of the 20th century. He worked with some of the world’s leading actors, among them Marcello Mastroianni, Harvey Keitel, Willem Dafoe, Bruno Ganz and Jeanne Moreau.